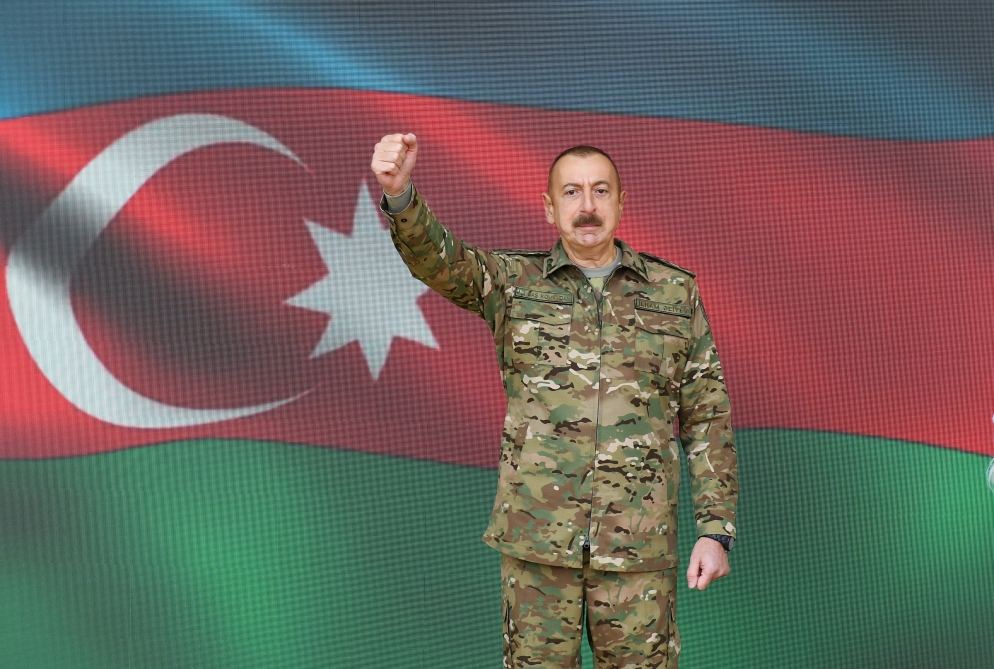 BAKU, Azerbaijan, October 3. Non-implementation of the resolutions, adopted by the UN, OSCE, the Council of Europe, the European Union and other organizations, regarding the settlement of the former Karabakh conflict, making no distinction between the aggressor and the party subject to the aggression, creation of impunity environment for Yerevan in the past 30 years pushed Armenia to more large-scale provocations, Trend reports.

Armenian Prime Minister Nikol Pashinyan, who came to power through the revolution in May 2018, and his team, inspired by the atmosphere of impunity created by international organizations, started to put forward new military and political claims against Azerbaijan.

- Use of "Karabakh is Armenia" expression by Pashinyan;

- Attempt to move the parliament of the so-called Armenian separatist regime to Azerbaijan’s Shusha;

- Former Armenian Defense Minister David Tonoyan’s speech from the US under the "New war for occupation of new territories" slogan.

From the end of 2019, Yerevan started practical implementation of military threats used by it against Baku and started shelling the villages of Azerbaijan located in the frontline with heavy weapons. On July 12, 2020, the Armenian provocation in the Tovuz direction of Armenia-Azerbaijan state border brought the military tension between Yerevan and Baku to a peak. Although the Azerbaijani army thwarted Armenia's provocations with harsh retaliatory measures, Yerevan didn’t give up its intentions.

Escalation of Armenian provocations and path to second Karabakh war

The military tension remembered as ‘Tovuz battles’ and the following political-diplomatic events were a sign of approaching the historical victory of the Azerbaijani people because the martyrdom of high-ranking military personnel in the Tovuz battles, the attempt of large-scale provocations by Armenian armed forces not in Karabakh, but on the state border, and the indifferent attitude of international organizations to the events, started to create a greater feeling of hatred towards Armenia by the Azerbaijani people.

The people seemed to feel that the day of great revenge was approaching. Against the background of tension, military activity of Armenia has seriously increased. Besides, in August-September 2020, Armenia began to shell more intensively Azerbaijani civilians and villages in the areas near the front line. Naturally, the Azerbaijani army could not remain unresponsive to Armenia's provocation.

Time has come... A very important stage in the modern history of Azerbaijan was beginning

On September 27, 2020, the people of Azerbaijan woke up for a completely different day in the morning. TV channels, radio stations, websites and social media one after another spread the following news:

"In the morning, the armed forces of Armenia carried out a large-scale sabotage and attacked the positions and residential areas of the Azerbaijani army located in the front-line zone with large-caliber weapons, as a result of intensive shelling from mortars and various types of artillery, in order to prevent the combat activity of the Armenian armed forces and ensure the safety of the civilian population, it was decided by the command of the Azerbaijani army to launch a rapid counter-attack operation of the troops along the entire front.”

The response given by Azerbaijani army to the Armenian provocation on September 27 by order of the Commander-in-Chief, President Ilham Aliyev created a shock effect in the Armenian society and government. Having hastily declared martial law and a general mobilization, Yerevan triggered the flare-up of the conflict in a short period of time and the start of large-scale military operations. The fact that Yerevan began to practically implement its plans to create large-scale military tension, triggered Baku to retaliate. As a result, martial law and curfew, as well as partial mobilization were announced in Azerbaijan on September 28.

Although Azerbaijan was stronger than Yerevan in military, political and economic terms, for nearly 30 years it showed its commitment to resolving the conflict peacefully, within the framework of international law, in accordance with the four UN resolutions, and made serious efforts in this direction. At the beginning of the conflict, the UN Security Council adopted four resolutions on Karabakh. The resolutions urged the Armenian armed forces to unconditionally withdraw from the lands of Azerbaijan.

Besides, the members of the OSCE Minsk Group, which assumed the role of mediators between the parties for the peaceful resolution of the conflict - US, France and Russia, didn’t behave according to their missions, not fulfilling their obligations. Although Azerbaijan insisted on the implementation of adopted four resolutions for nearly 30 years, the UN didn’t make any positive decisions, nor put pressure on the aggressor.

Under the leadership of the Supreme Commander-in-Chief, President of Azerbaijan Ilham Aliyev, based on Article 51 of the UN Charter (the right of self-defense granted to states under Article 51 of the UN Charter) ‘Iron Fist’ operation was launched for the liberation of the lands of Karabakh, occupied for nearly 30 years. As a result, Armenia was forced to sign an act of capitulation.

Territories liberated as a result of the successful ‘Iron Fist’ operation:

According to the trilateral statement signed by the leaders of Azerbaijan, Russia and Armenia on November 10, 2020 [following the end of the operation], Yerevan was forced to return Lachin, Kalbajar and Aghdam districts without any military action.

- According to the trilateral statement, a Russian peacekeeping contingent was deployed in certain regions of Karabakh for a period of five years.

- Withdrawal of the troops of illegal armed groups from Karabakh;

- Opening of the transport infrastructure connecting Azerbaijan's Nakhchivan with the country's mainland;

- Taking steps to restore the movement of transport and communication means (Zangazur corridor) in the region.

The leadership of Armenia, which received heavy retaliatory blows from the first days of the war, was confused and desperate. Prime Minister Nikol Pashinyan saw the way out mostly by calling Russian President Vladimir Putin and French President Emmanuel Macron, literally ‘begging’ them to stop Azerbaijan.

Some international organizations and several states, which didn’t take practical steps to help resolve the conflict for nearly 30 years, were putting pressure on Azerbaijan since the beginning of the second Karabakh war.

During his address to the nation on October 26, 2020, President Ilham Aliyev spoke about the pressures on Azerbaijan and gave a harsh response to the baseless claims of those forces.

"As I have been saying for the past few years, the world is not the same any longer. The force factor comes to the fore and this was not done by us. Take a look – do large states reckon with international law today? No! Do they reckon with the UN Security Council? No! Everyone does what they want in their places, one enters there, another one enters there, the third one divides some territories. There is no semblance of international law. So why should we defend it? We are defending it anyway and are not taking steps outside the law,” the president said.

“We are not entering the territory of Armenia, we are restoring the territories recognized by the international community. If the permanent members of the UN Security Council, the co-chairs of the Minsk Group could not do this, then let them step aside and not interfere. Unlike Armenia, we do not ask anyone for help. Don't let them interfere and test the patience of the Azerbaijani people," he also stated.

Naturally, some pro-Armenian organizations and states had to remain silent in front of President Ilham Aliyev's speeches based on historical facts. Besides, due to the political support of Türkiye, Israel, and Pakistan to Azerbaijan, and Russia's neutral position against the background of tension during the second Karabakh war, pro-Armenian organizations were unable to exert effective pressure on Baku.

The president played an important role in conveying information about Azerbaijan's fight for justice to the international community before, during and after the second Karabakh war, and he still continues this mission. The head of the country gave a history lesson to the TV reporters, who took an anti-Azerbaijani position and didn’t accept that Karabakh is the territory of Azerbaijan.

During the second Karabakh war, the president gave about 30 TV interviews. The interviews with foreign media and his messages to the world were published in the headlines of influential agencies and caused great resonance. The head of state answered all questions, even speculative ones, with restraint, politeness, detailed, logical and precise answers.

Azerbaijani soldiers and officers who showed bravery in the intense battles for the territorial integrity of Azerbaijan, its civilians who served for the army on the rear front, and the Azerbaijani people as a whole showed determination and will, united like a fist, and dealt crushing blows to the Armenian occupiers.

The people of Azerbaijan liberated their lands from the occupation at the cost of the blood and lives of its heroic martyrs, soldiers, officers, and veterans.

During the war, about 100 Azerbaijani civilians, including children and women, were killed as a result of Armenian military provocation. More than 400 civilians were injured, 2,406 private houses, 92 multi-apartment buildings and 423 civilian facilities were damaged and destroyed. Cities and villages in Aghdam, Barda, Fuzuli, Goranboy and Tartar districts, Ganja, Naftalan and Mingachevir cities were hit by rocket fire.

In Azerbaijan, by the order of President Ilham Aliyev, state programs are being implemented to improve the social and economic conditions of the families of martyrs and veterans, and intensive measures are being taken to solve their problems.

As a sign of deep respect to Azerbaijani soldiers and officers, who fought heroically in the second Karabakh war, and sacrificed their lives for its territorial integrity, all its martyrs, by the Decree of the President of Azerbaijan Ilham Aliyev dated December 2, 2020, it was decided to mark September 27 as the Memorial Day every year in the country.

The second Karabakh war ended with the brilliant victory of Azerbaijan. Azerbaijan's victory and military operations are studied all over the world in terms of both technical capabilities, and operative steps, preparation and execution of operations.

Moreover, as the world witnessed, the idea that ‘Armenian people are fighters’ is nothing more than a myth.

Equipment of the Armenian armed forces destroyed during the second Karabakh war:

Along with putting an end to 30 years of injustice by force, Azerbaijan created new reality regarding the future of the South Caucasus and the world in general.

- It was proved to the whole world how valuable Karabakh is for the people of Azerbaijan;

- The 30-year occupation was ended;

- The Armenian armed forces and the myth of ‘invincibility’ were destroyed;

- It was proved to international organizations that the conflict can be solved by force;

- Important decisions were made to ensure direct transport connection with Nakhchivan Autonomous Republic;

- Favorable conditions were created for signing a peace treaty with Armenia;

- The construction of the Zangazur corridor was put up on the agenda and Azerbaijan's transport capabilities began to increase;

- The world saw the military, political and economic strength of Azerbaijan;

- The country recognized its friends and enemies once again;

- Extensive construction work began in Karabakh and the "Great Return" was launched;

- The liberation of the historical city of Shusha created a great sense of pride and self-confidence in the Azerbaijani people; and finally

- under the leadership of President Ilham Aliyev, Azerbaijan proved to the world and to the patrons of Armenia that "Karabakh is Azerbaijan!".