Eminent public figures and well-known figures of culture and art participated at the event.

During the lecture Taus Makhacheva spoke about her works.

The problem of the formation of cultural and ethnic identity as one of the central themes of social and artistic reflection in the Caucasus region in Taus Makhacheva's work, is closely connected with the choices of a "coordinate grid" - moral, ethical orientations in new life conditions.

The artist acutely marks troubling signs of change: a chaotic stream of transformations, traditional world apprehension and fragments and disjointed residues of "catchy" examples of a civilized world. I

In an attempt to structure this flow she asks: "How is identity within the new social community formed?"

The works by Taus Makhacheva - is attempt to answer this question raised and the possibility that points towards the need to move from unconscious mythmaking that unites into one narrative traditional cultural system of contemporary symbols and signs, into reflexive, attentive treatment of the past and tradition, national memory, and history.

Taus Makhacheva (b. 1983, Moscow) - winner of "Innovation" state prize in contemporary art ("New Generation" category, project "The Fast and The Furious", 2012) and nominee of the Kandinsky prize ("Media Project of the Year" category, 2011).

She holds a BA in Fine Arts from Goldsmiths College (London) and an MA from Royal College of Art (London). 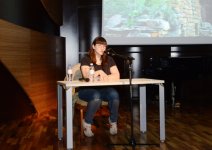