Society Materials 8 November 2013 19:59 (UTC +04:00)
Trend: On November 22, the world premiere of the Cradle to Cosmos exhibition by the United States Space and Rocket Center will be held at the Heydar Aliyev Center. 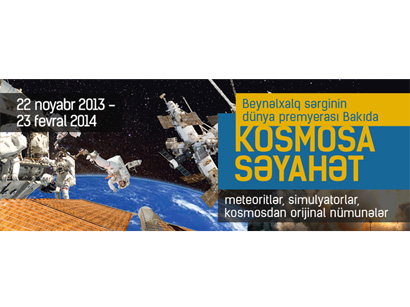 Trend: On November 22, the world premiere of the Cradle to Cosmos exhibition by the United States Space and Rocket Center will be held at the Heydar Aliyev Center.

The history of space conquest since the earliest days all the way to the accomplishments of the recent half a century will be presented at the overall area of 3,500 square meters lavishly provided by the Heydar Aliyev Center, the center told Trend on November 8.

More than 100 unique exhibits presented will delve into the history of human endeavour in space. These include the spatial stations, original particles delivered from cosmic space and other planets, pieces and models of satellites, aeronaut suits and accessories, particles of meteorites, etc.

The exhibition will provide any visitor, irrespective of the age, with a unique chance to make a virtual trip to the space. Six stimulators installed at the show will create a memorable, although short-lived impression of a space flight.

Along with some cutting-edge exhibits never displayed before, the exhibition will present Azerbaijan's initial aerospace accomplishments, such as the country's first satellite, related information, models, etc.

A noteworthy detail in this regard is that previous shows by the U.S. Space and Rocket Center all over Europe were attended by more than 1.5 million visitors. Meanwhile, the event at the Heydar Aliyev Center in Baku appears as the first display to some truly outstanding exhibits. The show is to last till February 23, 2014, to then move to Paris, Brussels, Amsterdam, Milan and other venues.

It should also be noted that the Cradle to Cosmos exhibition will be held jointly with the Ministry of Communications and Information Technologies in the framework of science and education oriented projects launched by the Heydar Aliyev Center. The event's major objective is to promote information technologies, raise awareness in the field of space studies and support the strategy for further development and application of ICT in Azerbaijan.