After commemorating the victims of the genocide with a minute of silence, the short film about the Khojaly tragedy was demonstrated.

In the event the performance “26 years without Khojaly” was demonstrated by the memebers of UNEC Creative Center. 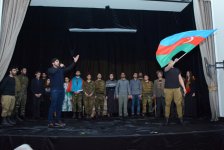