President of the Republic of Azerbaijan Ilham Aliyev received the credentials of newly-appointed Ambassador Extraordinary and Plenipotentiary of the Swiss Confederation Philipp Stalder Oct. 20.

President Aliyev said strong cooperation between Azerbaijan and Switzerland has developed even further over the last years, and expressed pleasure that these ties covered a number of fields. Touching upon the reciprocal visits of presidents of Switzerland and Azerbaijan, the president stressed the importance of the highest level of mutual contacts, and an active dialogue between the ministries of foreign affairs. President Aliyev noted that good results were achieved in the fields of economy and mutual investment making, and described it as an indicator of the comprehensive cooperation between the two countries. The president said the two countries were successfully cooperating as part of the Azerbaijan-initiated energy projects. Noting that the two countries were interested in developing bilateral relations, President Aliyev expressed hope that the cooperation would strengthen in the years to come. President Aliyev wished Stalder success in his future activities, and expressed confidence that the diplomat`s activity in the country would contribute to the expansion of bilateral ties.

Stalder said he was deeply impressed with the landscaping work carried out in Baku and a beautiful view of the city. He said Azerbaijan`s importance increased not only for Switzerland, but for the entire continent.

Stalder said he was pleased to be the ambassador in Azerbaijan, adding he would pursue mutual interests during his diplomatic tenure in Baku, and would spare no efforts to contribute to boosting bilateral ties even further. 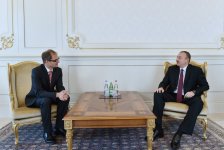