Editor's note: Details were added after the 11th paragraph

"The convergence of the Caspian countries' positions on key points in the process of agreeing on a draft convention on the legal status of the Caspian Sea has created the basis for the next Caspian States' Heads' Summit to be held in Baku," the minister said at a meeting on harmonization of the draft agreement on cooperation through the customs border services and departments of the interior agencies in the field of security in the Caspian Sea held in Baku.

The Caspian countries' second summit held in Tehran in 2007 identified specific areas for future work to finalize and adopt the draft convention on the legal status of the Caspian Sea, Mammadyarov said.

"At the summit, Azerbaijani President Ilham Aliyev stated that from the perspective of further development of the region, an understanding and agreement on ways of defining the legal status of the Caspian Sea will further strengthen mutual trust, peace and security in the Caspian region and provide the basis for closer cooperation," he added.

All the Caspian littoral states should intensify their efforts to ensure holding of the successful Summit in Baku, he said.

"The meetings organized in the past have contributed to the process of negotiations on the final status of the Caspian Sea," the minister said. "However, the recent Baku meeting of deputy foreign ministers demonstrated that many important elements still remain open."

"Azerbaijan is convinced that improve of the investment climate, development of energy resources and establishment of peace and stability in the region reflect the interests of the region. The pipelines Baku-Supsa, Baku-Novorossiysk and Baku Tbilisi-Ceyhan, as well as the implementation of projects on the Baku - Tbilisi-Erzurum gas pipeline and construction of the Baku-Tbilisi-Kars railway serve economic development and prosperity of the region and strengthening global energy security," the minister said.

According to the minister, if the sides agree on the draft project provided by Azerbaijan, then preparations for the Third Caspian States' Heads' Summit in Baku may be launched.

"Azerbaijan has always been a supporter of activities of the Caspian littoral states on the basis of the principles of respect sovereignty of states' equality, non-use of force and threat of force. Azerbaijan is convinced that the establishment of the Caspian Sea equal security conditions will create fully peaceful conditions to use the sea and turning it into a zone of good-neighborliness, friendship and cooperation ", he added.

The minister noted that Azerbaijan attaches great importance to developing bilateral and multilateral cooperation on the basis of universally recognized principles and norms of international law in the fight against terrorism and organized crime, illicit drugs and weapons.

Azerbaijan considers that the subject of the draft agreement should address issues of cooperation of border and customs authorities, the ministries of interior, emergency situations and transport, and maritime administration, Mammadyarov noted.

Military and political aspects of security in the Caspian Sea should be discussed and resolved within the framework of the draft convention on the legal status of the Caspian Sea, he said.

"We hope that the two-day meeting will develop a final document based on the current draft and in the future it will act as the legal framework for cooperation between littoral countries in the field of security," he added.

Kazakhstan, Azerbaijan and Russia signed an agreement on the delimitation of adjacent sections of the Caspian Sea May 14, 2003. 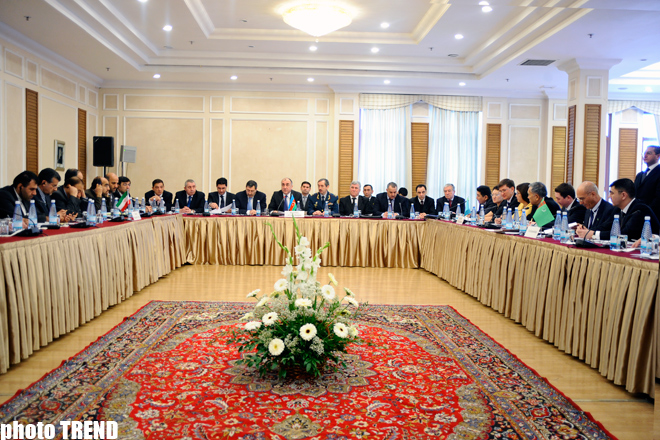