"The GDP of the non-oil and gas sector increased by a record 10.3 percent, compared to the first quarter of last year, and amounted to almost 15.1 billion manat ($8.8 billion). This is an important indicator of the accelerated recovery process in the Azerbaijani economy,” the publication says. 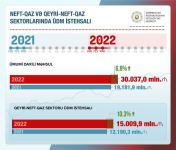