Karabakh horses perform in a show in London (PHOTO) The cavalry of the Azerbaijani State Border Service has presented a show titled "Azerbaijan - Land of Fire" with participation of Karabakh horses at an event marking the 75th anniversary of the Royal Windsor Horse Show in London.

The show program was organized with support of the Azerbaijan Equestrian Federation (ARAF), the Culture Ministry, and The European Society of Azerbaijan (TEAS).

The 24-member Sardhadchi dance group, the Natig Rhythm Group, artists Nizar Mammadov and Agshin Kazimov participated in the event organized on the eve of the birthday of Queen Elizabeth II.

Chief of the State Border Service, Colonel General Elchin Guliyev awarded the young artists with diplomas for their participation in the event in the UK. 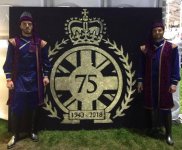